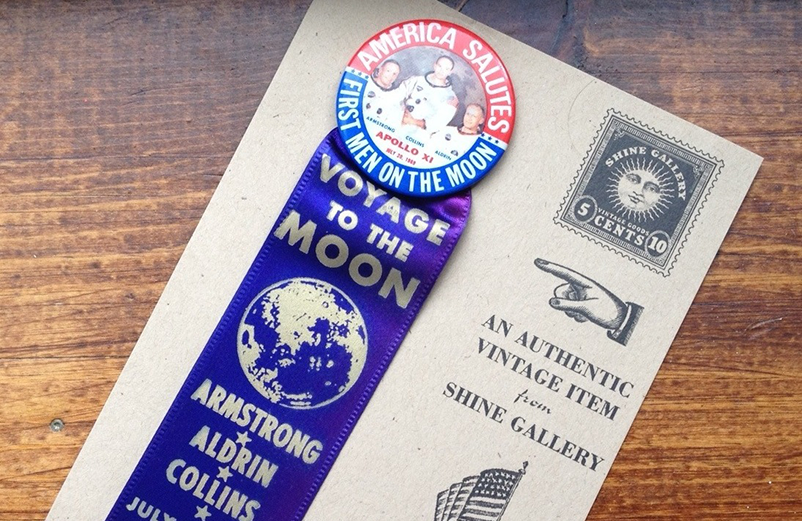 Awesome intel on the moon landing.

In the mail from my San Francisco pen pal–a commemorative moon landing pin! Lots of fun memorabilia was created for the momentous event (just search the vintage section of etsy for “moon landing” to discover some seriously kitschy space stuff), and I’m glad to own a small piece. The collection is growing…

In honor of this gift, I called my almost-astronaut dad to discuss my new addition, and our phone call turned into a bit of an interview.

It’s 1969. I wasn’t there. But men walked on the moon! How crazy was it to actually watch?

The first men off this planet onto another heavily body? Holy mackerel! We lived in an age of exploration that was just unprecedented. A lot of people in those days were comparing the trip to the moon to Columbus’ voyage. But Columbus had it easy compared to what the astronauts had to to do get to the moon and back. The Columbus discovery wasn’t the discovery of a new world. Just ask the Native Americans. It was the European invasion.

Astronauts were real heros back in those days. And not just the perception of heroism. But they had pretty much decided there was a high probability they weren’t coming back. It was a miracle we didn’t leave anyone on the moon. Again in ’69, you have to put a lot of things together. I was 20. Think about where your head is at at 20. It was Woodstock, and free love, and LSD, and race riots in big cities, and huge technological advances. The first computers were appearing. Think about the social and scientific developments. And it was the Cold War. It was bomb shelters and thermo-nuclear war and the Cuban missile crisis. It was a transformative time to be a young adult. 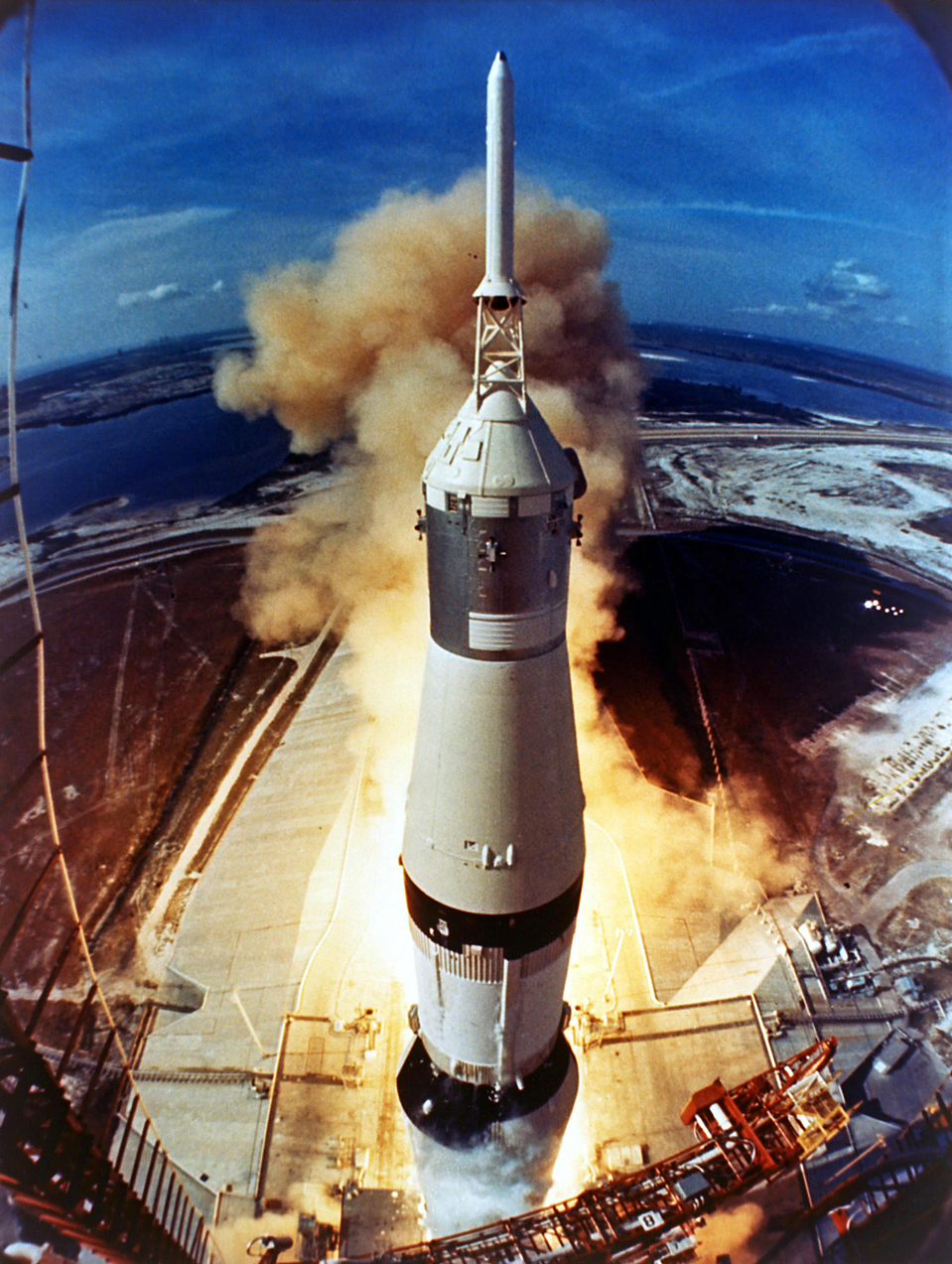 Damn. I’m jealous. But what about the skepticism of the moon landing? Did everyone have doubts?

From ’69 to the mid ’70s there were whole magazines dedicated to debunking the moon hoax. There were people who published article after article saying we had never been to the moon–saying it was put on by the American government. I remember they would look at the astronaut pictures to see “where the wires were.” But in those days, if we had a serious space incident, the Russians would have made a lot of hay out of it. We would have known about it. You get a good view from Earth orbit, but that goes both ways. You can see what’s going on up there. When you have a good view of something it normally means something has a good view of you, too. That’s the way light works.

Ha! What about the actual landing?

They had ideal landing sites and then alternate lading sites. We didn’t really know what it would look like. We didn’t know if it was slanted or had rubble on it. And they would name everything. Remember the first one? Tranquility base. “The eagle has landed.” They landed on Earth side, so they could also have continuous radio communications.

The moon is in synchronic rotation with its orbit. It rotates on it axis, and revolves around the earth. Because it revolves around the earth once per month and rotates on its axis once per month, it always shows its same side to the earth. So there isn’t a “dark side” of the moon, there is only a back side of the moon. A few other moons have a nearly synchronous rotation, like Pluto and Charon. There are gravitational reasons that when two large bodies rotate fairly close to each other, the orbits will put them into synchronous rotation. It’s  the gravitational dynamics of orbiting bodies. It’s simply because the moon is fairly big and close enough and old enough. For example, the shuttle orbiter in low orbit has a gravity gradient mode, where it orbits and points it tail right down to the earth. As the shuttle goes around in gravity gradient mode, the tail always points towards the earth. That’s a stable orbital rotation because of the same reasons the moon is in sync with earth. You can Google “gravity gradient shuttle orbit” and it will tell you all about it, I’m sure. You can Google anything you asked me and get the right answers.

Yeah, but that’s not as interesting. So what gave you the astronaut bug?

It was the early days of the Shuttle program. They were building the Enterprise and dropping it off of airplanes and seeing if it would fly. It was a space adventure! To be a young country-boy-turned-scientist–a young guy with no family to worry about–it was just perfect for what I wanted to do. If you talk to my mom and dad, I had  bit of a wanderlust in me in those days, too. I was sort of restless. Space was the frontier. A lot of us wanted to be astronauts. Of course, astronauts were taken primary from the Air Force test pilot crew. But then in the 70s they established a whole new core, the mission specialist rank, which could also go into space. They were scientists and doctors and physicists–they weren’t meant to fly the vehicles. That’s when a lot of scientists my age got on board. I’m pretty sure it was the first round of mission specialists that I applied to NASA.

I knew my chances were small. But I also knew I was the right age at  the right time and that they’d be looking for nuclear physicists because one of the big questions was whether or not the nuclear environment in space was a serious hazard. I gave myself pretty good marks in terms of the discipline I was in and the fact that I was single. My bad eyesight and the fact that I wasn’t a pilot were the negative aspects. They have so many people apply though, so they didn’t have to take a good scientist with bad eyesight because they had good scientists with good eyesight. As the MS category kind of evolved it was of less and less of the physicality and then of course John Glenn–the geriatric!–flew and now space flight is open to practically anybody.

So where did Apollo 11 land? Google moon will show you. As will this image (from here): 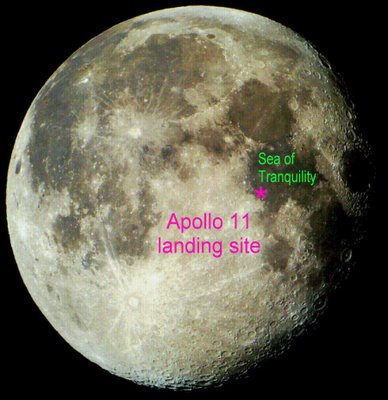 Where were New Yorkers in late July, 1969? In central park, watching the drama unfold: 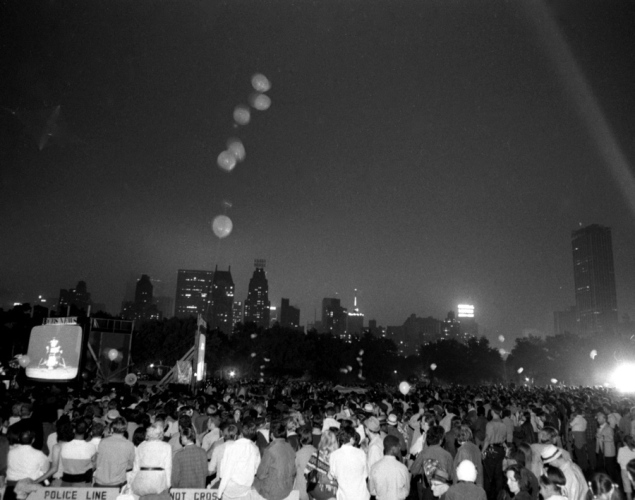